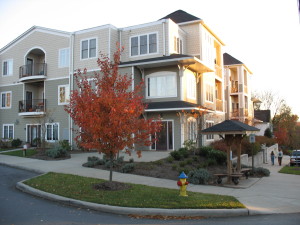 We are living in historic times. The tourist economy is booming while affordable housing is shrinking, and the two are related.

The city of Asheville is changing its shape and personality in response to the economy, infrastructure needs, housing demand, and being prevented from expanding.

Neighborhoods are trying to hold onto their character, which sometimes pits them against transient residents, commercial and traffic-related growth, and things perceived as lowering property values.

So, “Visiting Our Past” goes all the way back to 1988, when local housing advocates and Pisgah Legal Services held a conference on affordable housing; and to July of that year when Mountain Housing Opportunities had been formed to “promote, develop, construct or otherwise provide housing for low income people.”

“Lord, I have noticed the difference,” said 71-year-old Martha Banks of Alexander in 1992 after MHO spent almost $10,000 painting the stucco exterior of her home, putting on a new roof, weatherizing the windows, and installing insulation.

“One woman in the county was so happy after we underpinned her trailer and replaced cinder blocks with treated wood steps and banisters that she said she just wanted to run up and down the steps,” Samuel Abdul-Allah, MHO’s construction supervisor, said in 1991.

In its first years, MHO concentrated on making repairs to and renovations on existing homes.  It then ventured into buying lots and dilapidated structures and selling homes; and eventually built apartment complexes and subdivisions.

In 1994, Bertha Fields got help from MHO for her house on the other side of Interstate 40 from Shiloh. She was 77 and had grown up there with her parents and eight siblings, “a modest two-bedroom house, packed to the gills with people but filled with love,” Carol Currie wrote for the Citizen-Times. Young Bertha had roamed the surrounding country and picked berries.

In adulthood, she took care of her ailing parents there; and later, cared for a dying nephew and an injured sister.

By 1994, the house was in serious disrepair.  “The heavy refrigerator would have fallen through the floor had the floor not already been on the ground,” she said.  There was no hot water; heavy rains leaked through the roof.

When MHO told her that her house had to be knocked down to build a new one, she shouted, “Let it go!”  But she would not leave the property, and was provided a trailer on site while construction proceeded.

To accomplish its ends, MHO enlists a Rolodex of helpers: service agencies, bankers, philanthropies, neighborhood groups, city planners and legislators, federal and state funding agencies, contractors and architects, who work free or at discount, and volunteers.

Asheville realtors have built ramps for handicapped residents; high school students from across the country have picked up hammers and nails.

With all this good intention, how is there still a housing problem?  What are the obstacles?

Here is where the history of housing butts up against other historical forces.

North Carolina has not always funded, or adequately funded, its Housing Trust Fund, an important source of financing. Highways often cut through poor neighborhoods. The Asheville tourism and high-priced home-buying booms have made property for low-income housing less available or more expensive. Neighborhoods have at times feared resultant effects on density, traffic and character.  Exceptions or changes to zoning have had to be made.

In North Asheville — the hot spot for vacation rentals (a practice now banned by the city except for rooms in people’s homes) — the concern for affordable housing stock did not prevent controversy from erupting when MHO introduced plans for The Larchmont, an apartment complex on the former Naval Reserve site, which the county owned.

Sometimes, the inexpensive lots require sewer line extensions or other required infrastructure, which drives up cost.  He said “the city could streamline the process by generating a map of available lots.”

In 2002, MHO began working on Merritt Park, its first condominium project. It required a zoning change, which got full support from the West End/ Clingman Avenue Neighborhood. WECAN welcomed the community improvement the housing would bring.

Jessie Coleman, a longtime resident of the community and an early MHO board member, told Citizen-Times reporter Mark Barrett that WECAN was hurt over the years as highway and bridge construction took wide swaths of it.

“We’re trying to re-weave the fabric of one proud and beautiful, near-downtown neighborhood,” Scott Dedman, MHO founder and executive director, said.  “The first homes in this area were built before 1900, and the newest were in the past week…There is great care to pay attention to architectural detail.”

Rooms in Merritt Park have high ceilings and balconies.  A covered breezeway faces a courtyard, where children play under supervision. The building exterior features eaves and overhangs. The horseshoe shape derives from Dedman’s love of the design of Carolina Apartments on North French Broad Avenue.

“We wanted to build it so that kids getting off school buses would not feel stigmatized,” Cindy Weeks, MHO director of community investment, noted.

Weeks was particularly concerned with the hardships that single parents faced finding stable and nurturing homes for their children.

“From 1979 to 1987, I was a single parent of two young boys,” Weeks wrote in the Spring 1998 issue of the MHO newsletter, “Opportunities.”  “When I dreamt of the perfect home…some of the qualities I imagined were: bright, cheerful, safe play areas, serene, convenient, well-maintained, roomy, and, of course, affordable.”

Jen Zelman had been the first candidate for a Merritt Park Condo in 2002.  She’d come with her young daughter to Asheville from Albuquerque, New Mexico, where she’d been an artist. She got a job at Earth Fare and lived in four rentals before resolving to provide a secure place for her child.

She took a class in home buying with the Affordable Housing Coalition, at the end of which time she took a tour of affordable housing locations.

“They brought us to an empty plot on the corner of Clingman and Hilliard that had a meadowy, overgrown hillock,” she relates, “and we climbed up and were told that MHO was going to be building a condominium complex there, and it was going to be architecturally creative (with) the units having as many sides and windows as they could manage.”

Zelman’s odyssey is a success story. Her daughter excelled in school, and they both enjoyed their proximity to the River Arts District, downtown Asheville, and Zelman’s job.

She served as the president of the Merritt Park Association for more than ten years, navigating fellow residents through the process of raising dues to pay for roof replacement.

What would she like to see happen in her community still?

Her answers reveal how affordable housing improves communities.  She would like to see the Hot Spot and Aston Park along Hilliard Avenue made into safe places; to have better and more widely used public transportation; and to provide better channels for the improvement of the lives of homeless people.

Rob Neufeld writes the weekly “Visiting Our Past” column for the Citizen-Times. He is the author of books on history and literature, and manages the WNC book and heritage website, “The Read on WNC.” Follow him on Twitter @WNC_chronicler; email him at RNeufeld@charter.net